What is a Chautauqua?

A Chautauqua scholar (Chautauquan), acting in character, portrays the events of a historical period or a historical person from a first-hand perspective, “becoming” that person. The Chautauquan spins yarns, sings songs, and recounts personal events, all with the voice of firsthand experience. The fun of the performance is the illusion that a famous historical character is really present, willing to answer questions, not only about his or her time period but also about our times.

Chautauquas are for everyone: TAH participants, teachers, students, community members…everyone! Come join us for the following Chautauquas.

PLACE AND TIMES: All Chautauquas are from 7:00 p.m. – 8:00 p.m. at the San Juan College Little Theater
Driving Directions to the Campus
Location of Little Theater (in the Central Classroom Complex in center of the map)
NOTE: The Venue for Dolley Madison has been changed to Henderson Performance Hall, San Juan College

The stage portrait of Dale Evans Rogers, presented by Ms. Kuhlmann of Ruidoso, takes its title from a line in “Happy Trails to You,” the theme song Dale composed for her husband, Roy Rogers. The audience meets Dale at two stages of her life:  as a film, television and recording artist while raising a blended family of seven children, and as an inspirational author.

About the Chautauquan: Kay Sebring-Roberts Kuhlmann has been creating and performing historical characters for twenty years. She founded the Women’s Chautauqua Institute at Cottey College. Her characters have been featured at the National Archives, six Presidential libraries, and at museums and arts centers across the country. 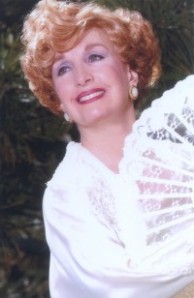 Dolley Madison (1768-1849) was a survivor of wars, intrigue, and challenges beyond the call of duty.  Dolley Payne Todd was a grieving Quaker widow when she married James Madison–the Father of the U. S. Constitution, a future president, and the dearest love of her life. Dolley began her political career as the confidant and best friend of Martha Washington, Aaron Burr, and many others. She acted as hostess for eight years for President Thomas Jefferson and became one of the most brilliant first ladies from 1809-1817.

Dolley displayed amazing courage when the British attacked Washington D. C. during the War of 1812. Statesman Henry Clay exclaimed, “Everybody loves Mrs. Madison!” Even her husband’s enemies admired Dolley’s tact and diplomacy. She would become an advisor of every President from Washington to Polk.

One cannot say enough about the “wonderful Mrs. Madison” and her advice to the United States today to never give up the fight to preserve our unique Constitutional government and our God-given rights to freedom.

About the Chautauquan: VanAnn Moore has been a Chautauqua researcher and performer for over 14 years, bringing a dozen historical characters alive for the NMHC and audiences across New Mexico and the nation.

January 10, 2014 – “All In, Down and Out: The Great Depression in Song and Story” by Jane Voss and Hoyle Osborne

The Great Depression inspired an amazing body of American popular and folk music. Woody Guthrie, Langston Hughes, Irving Berlin, Blind Alfred Reed, the Carter Family, E. Y. Harburg, Bessie Smith, and many others gave us insights on many different aspects of the Depression. Their songs are interwoven with readings from outstanding writers and wits of the day, as well as from ordinary working people.

About the Chautauquans: Jane Voss and Hoyle Osborne perform this historic American folk and popular music with verve and authenticity, accompanied by piano and guitar.

These Origins stories, in Navajo and English, present the worldview of the Dine people and their relationships with their surroundings. They are social versions of the sacred chants. They are told only from October through about early March (first thunder).

About the Chautauquan: Sunny Dooley tells Blessingway stories with the blessing of her family, clans, and elders. She has told the stories throughout the U.S, Canada, Europe, and Africa for over ten years.

The “world’s oldest living cowboy” tells, in story and song, of his years as a cowboy and his friendship with Billy the Kid. Stories about Billy the Kid are generally exaggerated. This program addresses the legend-making process while presenting the story of Billy that is supported by historical evidence.

About the Chautauquan: Ralph Estes is a troubadour, singing and telling stories of the West. He has performed at the Lincoln State Monument’s “Old Lincoln Days,” Ruidoso’s Hubbard Museum of the American West, the Albuquerque Folk Festival, the Albuquerque Museum, the Western Music Association’s International Music Festival, and many other venues across the Southwest.

Mr. Hampton (as Lt. Matthias Day) and one or more of the troopers of the Buffalo Soldiers Society of New Mexico, along with more than 50 period artifacts used by Buffalo Soldiers, bring the history of the Black cavalry to life. From Medal of Honor recipients to the common trooper, from Indian battles to battles with lawbreakers, this small number of Black troopers made a difference in the lives of law-abiding citizens.

About the Chautauquan: The Buffalo Soldiers Society of New Mexico teaches how the Buffalo Soldiers (1866-1900) overcame great hardships as they served their nation with honor and distinction. The Society was founded by George Carter, Jim Mitchem, Pete Powdrell, and Victor Smith.

Capitan Rafael Chacon was a witness to the most significant events in the formation of modern New Mexico, from the U. S. invasion of 1846 to statehood in 1912. At the age of 13, he commanded an artillery position at Apache Pass for the aborted defense of Santa Fe. During the Civil War, his company fired the first and last shots at the battles of Valverde and Glorieta. Chacon served with honor in the campaigns for peace with the Navajos and Apaches and was the first commander of Fort Stanton.

About the Chautauquan: Dr. Enrique Lamadrid is a folklorist, critic, translator, and professor at the University of New Mexico. His research charts the influence of indigenous cultures on the Spanish language and imagination.

This entry was posted in Events, Opportunities. Bookmark the permalink.